Ooh, lots of bits to share this month. The Rainbow Scrap Challenge color for April was pink. I didn't think I had that many pinks, but...well, here we go.

First, as usual, the extra blocks to extend my 52 Weeks of Scrappy Triangles project from last year. 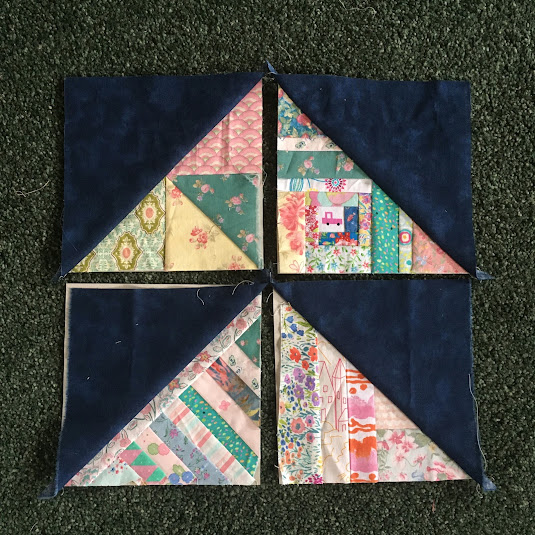 I really had to scrounge in the multi-colored scrap bin to find bits of fabric with pink in them  that looked okay together. I'm pretty pleased with how they turned out.

Then it was time for a quilt-as-you-go placemat. 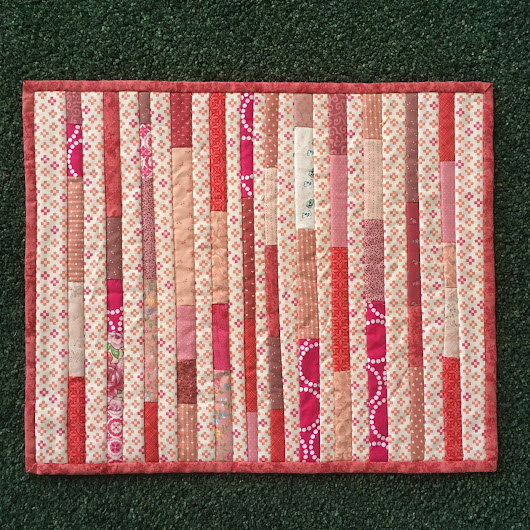 I had some skinny short pink strings left over from a previous RSC project. I sewed them end to end, but there weren't enough to cover a placemat. I did have some bigger strips (the kind that you cut off when trimming a quilt back) in a pink/coral on white, so with some careful planning and cutting, I was able to alternate them. I thought I had the darker pinks pretty well distributed, but after the placemat was done, I realized that I sewed the strip with the longest piece of the pearl bracelet print in the wrong direction. Oh well. I'm sure it won't bother anyone as much as it bothers me. 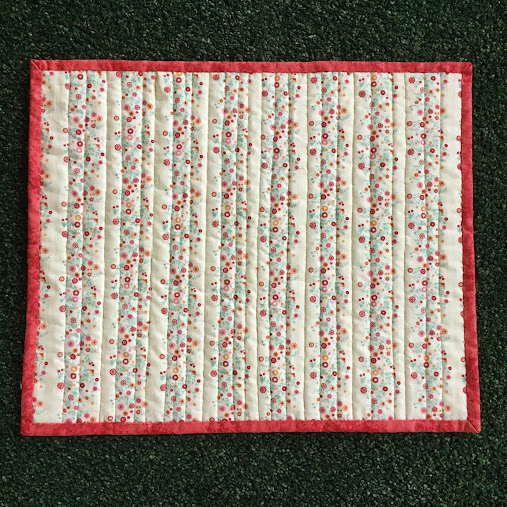 The back of the placemat is from a fabric that was gifted to me awhile ago by Mari of the Academic Quilter. (Thanks, again, Mari!) I think, with the Grunge binding, this makes a really attractive back and makes the placemat nicely reversible.

Next, I made my pink adding machine tape strips. 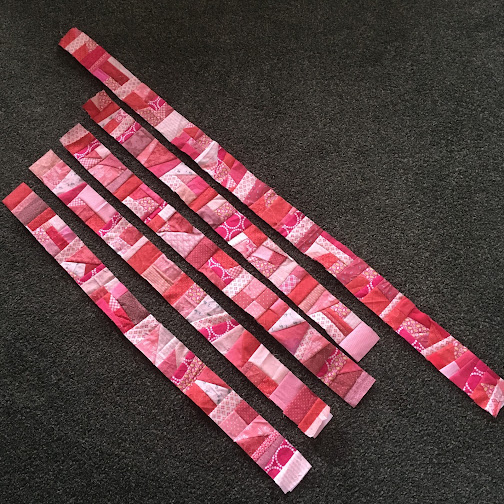 I was sure there would only be a few feet, but I kept sewing and sewing, and ended up with 16 ft 8 inches!

Having used up all but a tiny handful of pink prints, it was time to make my Bear Paw blocks for the month. I wasn't really crazy about the assortment of solid pinks I had, but I made them work. 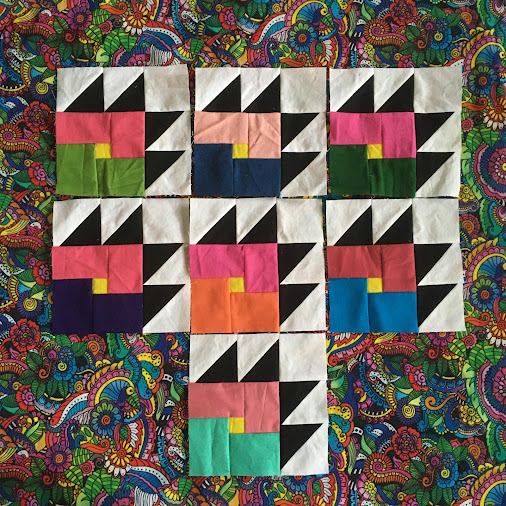 I'm getting better at doing that partial seam with the tiny yellow square. It's a bit fiddly, but strangely enjoyable.
After having all of our windows replaced a few weeks ago, we are in the middle of a big wood-finishing project now (when the weather cooperates), so small, quick projects that don't spread themselves around the house are better than starting a new quilt. I was bothered by the amount of yellow scraps I had left at the end of last month, so I set out to reduce those. I had another sunflower Bear Paw block from the Quilters Color Quest of a couple of years ago. I also had some of the sunflower fabric left that had never made it into a quilt. So that, with yellow scraps, became another QAYG placemat. 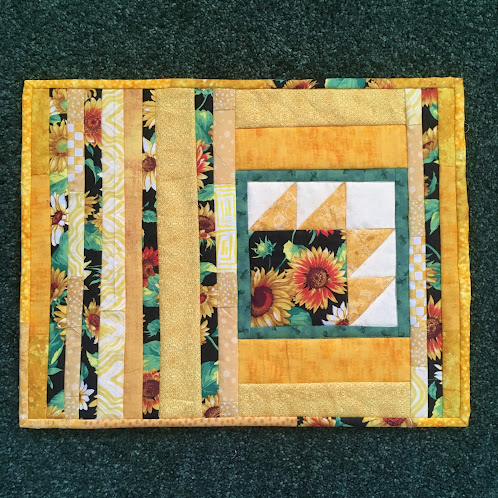 When I first laid out the fabrics, the claws of the Bear Paw block sort of faded away, so I framed it with some green scraps (with flies) before adding the yellow strips. I had enough yellow scraps to piece the back and make a scrappy binding. 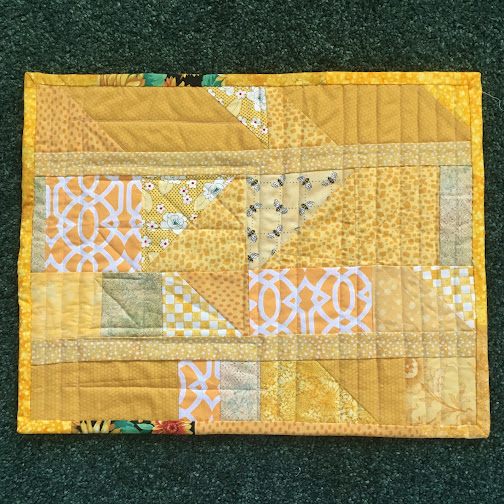 The back has bees, honeycombs, and a few more flowers, so there is quite the nature theme going on here, purely by accident. Both placemats are about 18 by 14 inches and will eventually go to Meals on  Wheels.

Making the placemat generated smaller scraps of the yellows I had left, so why not more adding machine tape? 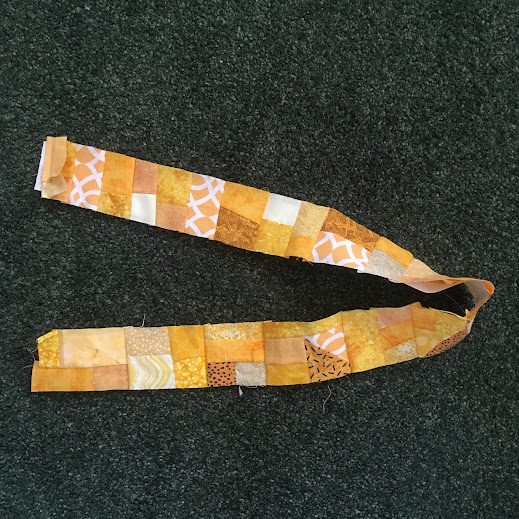 I made 3 1/2 feet before I ran out of variety. So now I have nearly 30 feet of yellow adding machine tape and a very small amount of yellow left. Some of it is already finding it's way into my last projects to share this month.

I have now officially left the RSC habit for my extra 52 Weeks of ScrappyTriangles and have been happily mixing whatever scraps catch my eye--mostly from the multi-colored scrap bin, but I've also mixed in prints that read more as solids that were leftover from the Confetti quilts (and those last yellows). I am amazed at how much less time it takes to make these blocks when I'm not trying to follow a particular color scheme from just the multi-color scrap bin. I managed to make 12 more blocks. I still do focus on colors (like "mostly blues"), but I'm much freer to just throw something together. 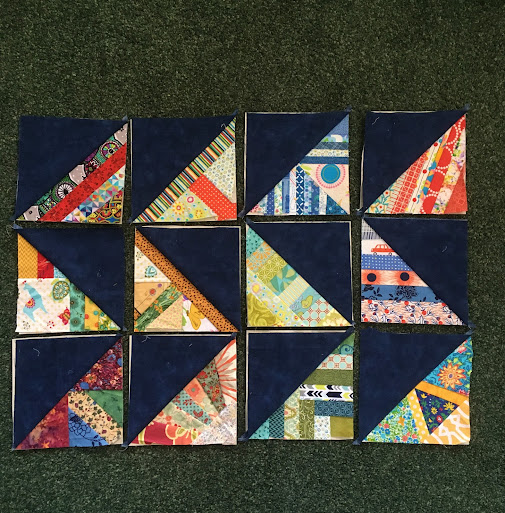 I now have 80 out of the 90 blocks I need to make a quilt, and it just occurred to me that this might be a Hands 2 Help quilt. (Please click on that link to find out more about H2H if you don't know already; you'll be glad you did, and so will Mari who is hosting this year for Sarah.) I can't guarantee that it will be done "on time," but that's okay. It's something to shoot for.

I'm linking up this week with Angela at So Scrappy for ScrapHappy Saturday and with Cynthia at Quilting is more fun than Housework for Oh Scrap (Sunday).

I hope you have had fun with your scraps this month, and that you've made a dent in them, if that was your goal.

Posted by JanineMarie at 8:38 AM

you have really used up your tiny pieces!

I'm always fascinated by your scrappy triangles, JanineMarie! They're going to make such a fun quilt. The adding machine tape crumbs are so neat! I'm also looking forward to seeing what you do with them. Great placemats, too! You have lots of fun things going on in your sewing room!

What a great collection of finishes. Love your two placemats and those Bear Paw blocks.

You always have such fun ideas and so much Quilty goodness going on. I really love that yellow placemat!!

I don't understand about the adding machine tape, surly you have to remove that, right? Do you have to use very small stiches. Looks like something I would like to try. Any hints I could like to hear them all.

I really enjoy seeing all the cute things you make with scraps. The adding machine tape is intriguing. What are you planning with it? Inquiring minds want to know!

Love your pinks and yellows and LOL at "fiddly, but strangely enjoyable" :D I really like your adding machine tape - what a great tool for scraps. Although I left the RSC habit last year, I haven't done as much with scraps, so I like your idea of choosing scraps that catch your eye for your scrappy triangles. As always, loved your post!

More lovely placemats, I really must update mine soon! Very impressed with how much of that tape you are making. xx

New windows! That is a huge undertaking but I bet it will make a big difference in the insulation of the house. On to the billion projects you have going!! Wow - so many bits and pieces you are using up. Love the sunflower mat - that will brighten someone's day for sure. For the adding machine tape - I am curious to see what this all turns into. It is very cool but are you actually piecing on strips of tape? Do you have to pick it all off? I tried looking through the posts in this category but I couldn't tell for sure how you were doing it. Anyway, love all of it.
PS - a while back, you made the blue and yellow Ukraine quilt for the front door - it is lovely and I just wanted to tell you.

That reminds me! I have some adding machine tape from years ago! I should be using it up! Yours are sew cute!

I need to carve out some time to work on reducing my strings and scraps even more. One placemat a month and one hot air balloon a month isn't doing as much as I'd like! I love all your projects, and can't wait to see what the adding machine tape will become.

Great use of all those smaller scraps. They are going to make some great scrap quilts. Thanks for sharing with Oh Scrap!

Wow! I can't get over how you are using even the smallest scraps and keeping up with all these projects. I especially like the way you are using your multi-coloured scraps - I always find those the hardest to sort, store and use.