I've sort of dropped the ball this year with Hands 2 Help, which most years is hosted by Sarah at Confessions of a Fabric Addict and this year by Mari of The Academic Quilter in support of Sarah who is taking time away for self care. Thank you to Sarah (and it's good to know that you are doing well) and to Mari. I wanted to have three quilts ready to donate, but one is stuck at the block stage--well not stuck but wading toward completion. I do have two quilts that I am donating that I completed right at the beginning of the H2H Challenge this year. 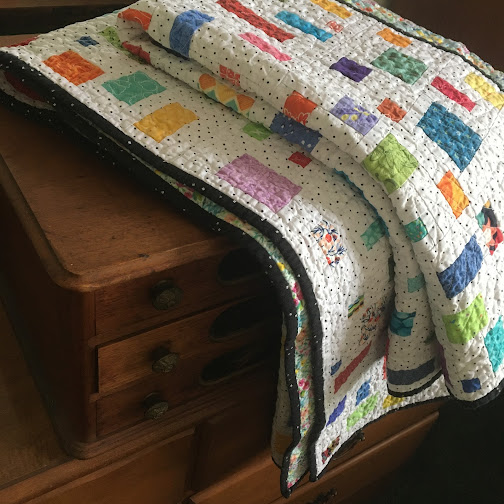 They are Confetti quilts from a pattern by Rachel Hauser. I thoroughly enjoyed making them. If you'd like to check out my progress as I made them (I sure took my time!), click on the Confetti label at either the right sidebar of this post or at the bottom.

Instead of sending these across the country, I'm donating them closer to home to Margaret's Hope Chest, an organization that supports the Mother and Baby Program at Pine Rest Hospital. This is a program for mothers with post-partum depression or other peri-natal mood/anxiety disorders. The wonderful thing about the program is that it is day-treatment which includes care for the babies. Each mother receives a quilt of her own as a comforting hug of hope during therapy sessions.

I'm linking up with Mari's Hands2Help2022 party over at The Academic Quilter and looking forward to seeing everyone's quilts for Hands2Help this year. Again, thank you, Mari, for taking this on this year in addition to everything else on your plate.

(Just a reminder: I'm not affiliated with any company, so when I mention products, services, or stores I'm just documenting what I used or liked.)
Posted by JanineMarie at 7:32 PM 5 comments:

With all that's going on in our world and my country lately, it's been hard for me to concentrate on quilting projects. But I forced myself because maybe it's therapy to have bits of things to work on (especially for others), and I did manage to get some small things done in the Rainbow Scrap Challenge colors of sage and forest this month. I was glad that the focus was on just part of the spectrum because I really didn't want to look in that bin and see how much was in there with ALL the greens. My first project was a quilt-as-you-go placemat using strings leftover from a previous RSC project. Funny how several times this year I have had just enough strings. 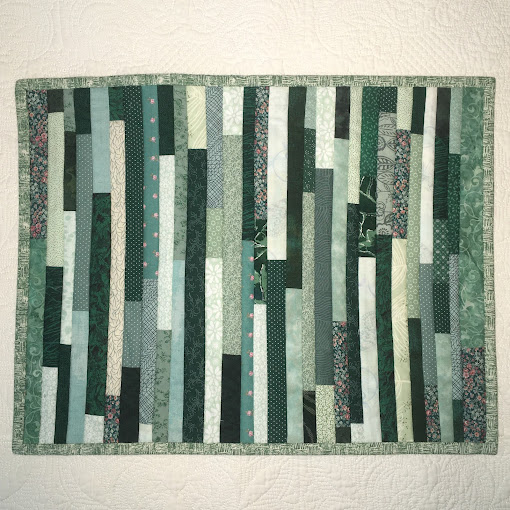 Sorting them out gave me pause at times. Is that a grayish green or a yellowish green? Sage or avocado? It really didn't matter. They will all get used up eventually. For the back of this placemat, I chose a leftover piece of green that I used in a quilt for our bedroom so many years ago that it is no longer in use except as an extra blanket when the grandkiddies come. 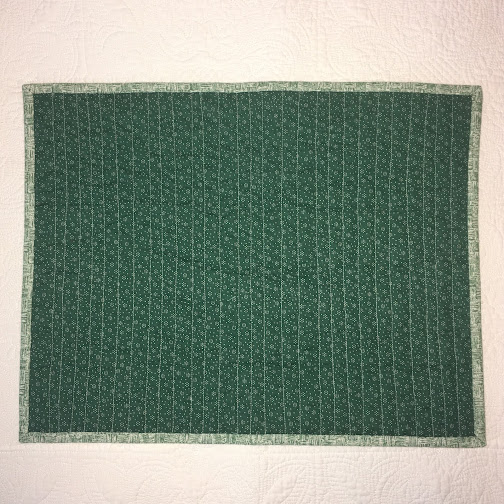 And that binding? Leftovers of a baby quilt for a grand-nephew who is now in his mid-20s!

After finishing the placemat, I turned to my adding machine tape project. I have had several people ask me how I am making these strips, so I took a few photos when making my first strip. I started by sorting out the smallest of my green scraps. 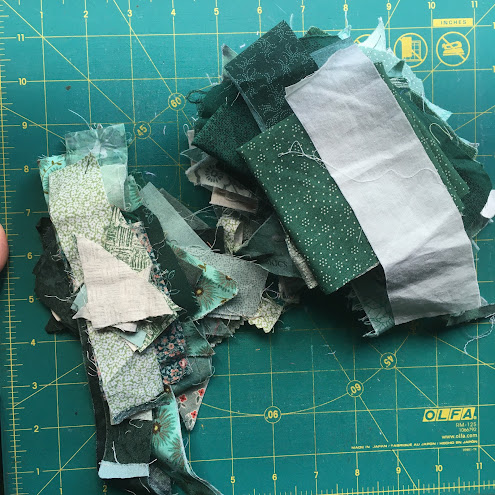 I use the adding machine tape as my foundation for paper piecing. 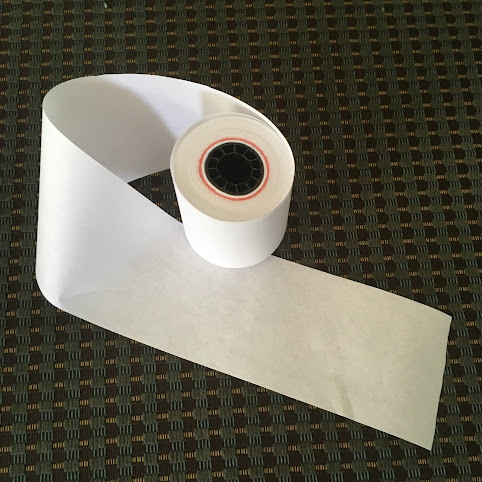 My tape is 2 1/4 inches wide, so I aim to cover it with fabric with an additional 1/4 inch seam allowance. I don't sew on every piece separately but chunk some together before adding them. I use a big needle and small stitch. Because my tape is a bit brittle, this sometimes results in enough perforation that the tape comes apart, but no problem. I just tape it back together. The whole purpose of using the tape is to sort of stabilize the sewn fabric so that it will stay fairly straight if I piece long strips together later.

So for this strip I started sewing together some bits that were too small to cover the tape by themselves. 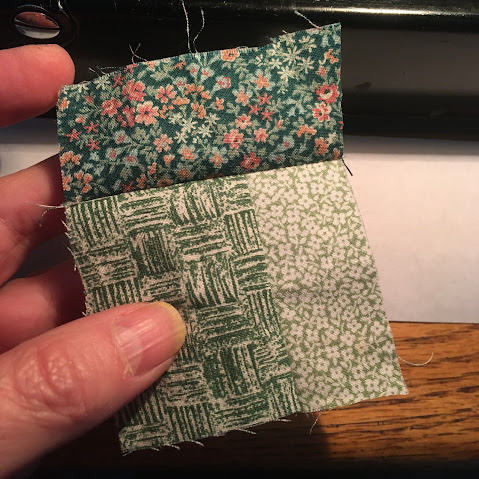 Here's that chunk positioned against the adding machine tape. 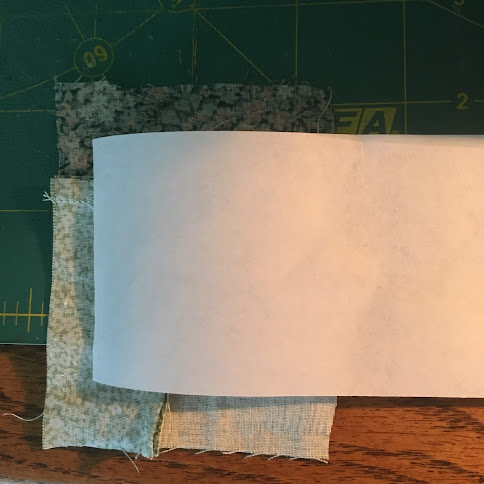 Then I added a strip of fabric to the chunk as in foundation paper piecing. 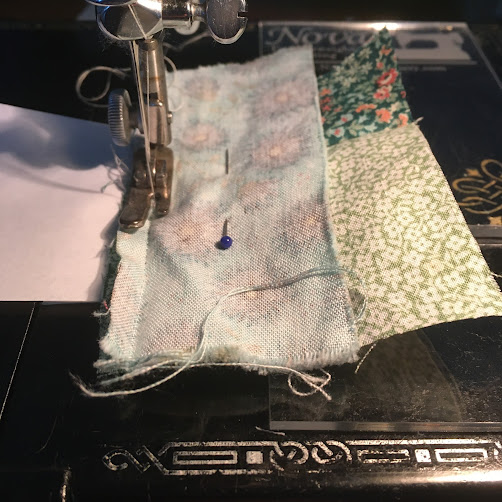 I know this looks like I'm sewing in reverse. I think I took the photo after sewing the seam. Also, you'll see that I placed the tape so that I was sewing to the left of the first chunk. That is because it's kind of awkward early on sewing with all the tape to the right of the needle. When I get to the middle of the strip, I turn things around and sew to the right of what's already been sewn on.

Here's how the strip looks with the one strip of fabric sewn to the chunk. 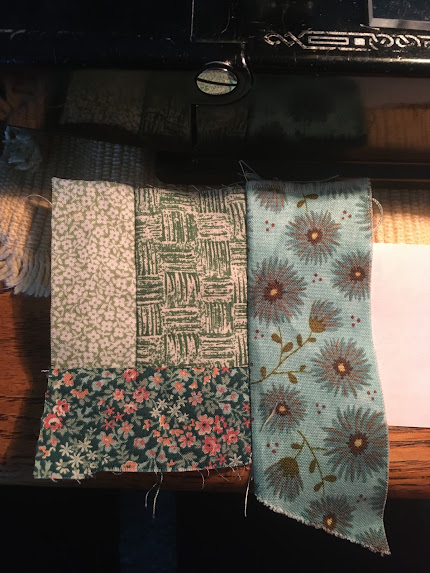 I tend to look for angled scraps to sew together to make rectangles. 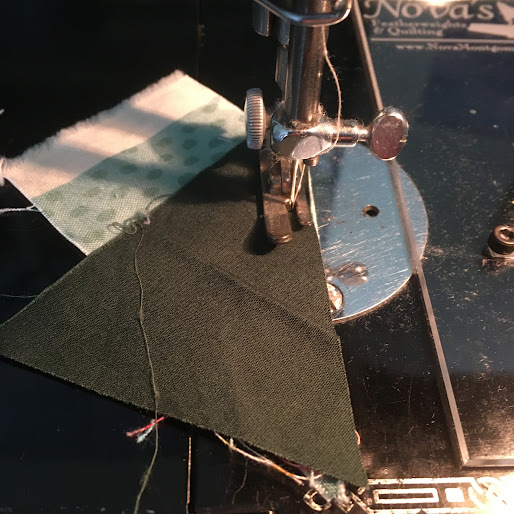 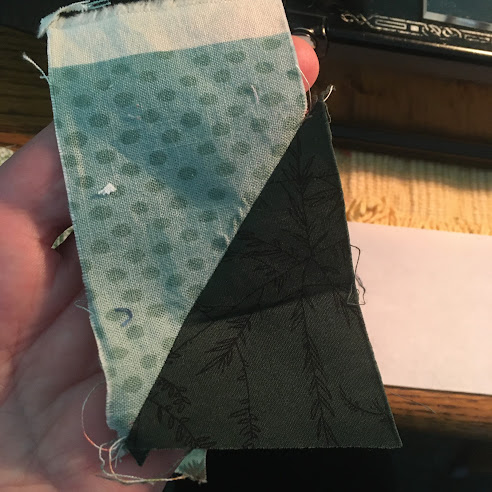 Here's that chunk sewn on. 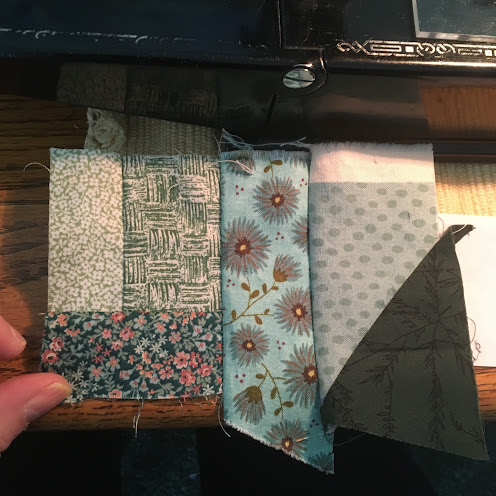 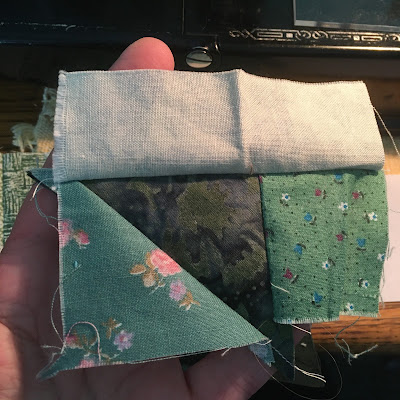 And sewn on. (I don't know why this photo is turned. One of the mysteries of blogging.) 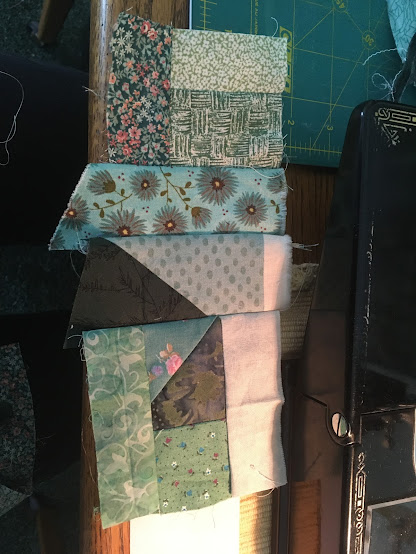 And here is how everything looks so far from the back. (Turned again. Sigh) 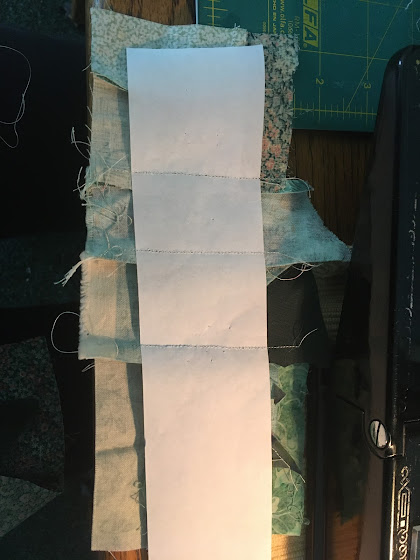 You can see that there are only 3 seams so far even though I've sewn more pieces of fabric. This will make it easy eventually to tear off the tape.
Here's that whole strip from the back. (Notice there are a couple of breaks there. It doesn't usually happen that often, but maybe I was handling the strip more than usual for photography.) 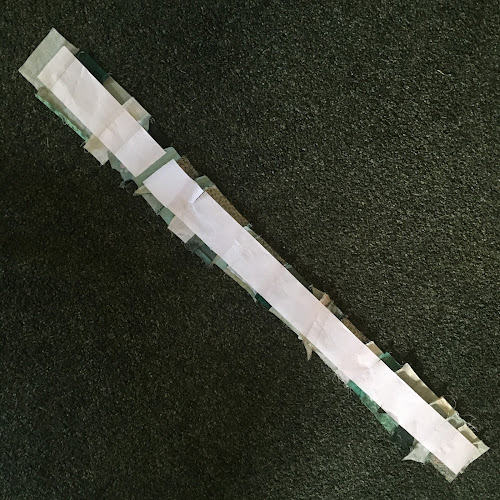 And trimmed to the seam allowance. ( And taped.) 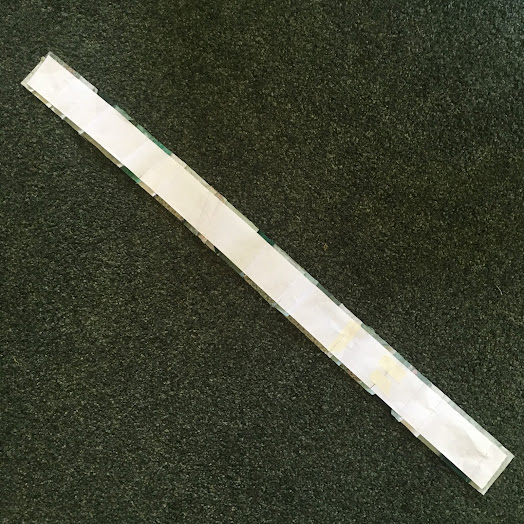 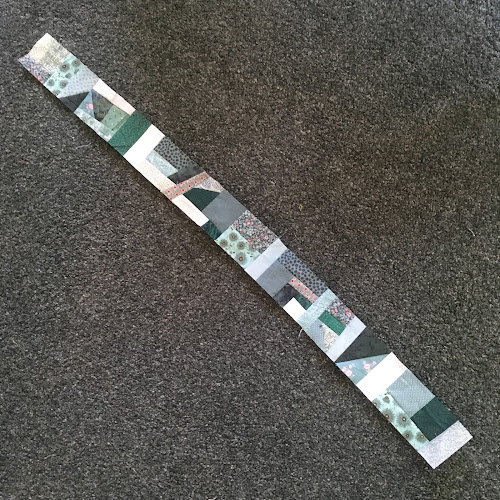 So basically, the piecing is a mix of chunks and strips with fairly even distribution of value. I'm not sure what the appeal is to me of sewing this way as I generally don't enjoy piecing slabs or crumb blocks. But, hmmm. Now I'm going to share something that totally contradicts that. Go figure.
When I was finished with three strips (about 3 feet each), my smallest scraps were about used up. I still had quite a few larger scraps. So it was time to try something else. I started sewing more chunks of similar sized pieces. Here are the light to medium scraps. There are more darker ones off camera. 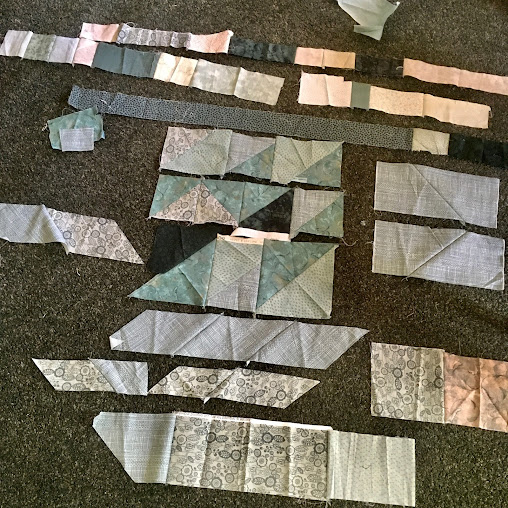 Those chunks became a second placemat. 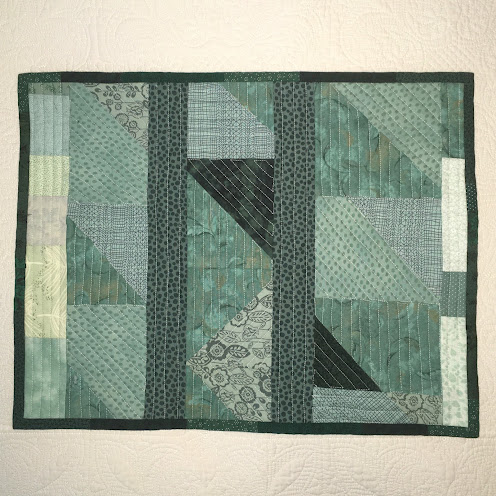 Not quilt-as-you-go. Instead, I quilted straight lines following main seam lines. There was a bit of organization. All lines are vertical in the mottled green fabric and horizontal in the crosshatched fabric.
More chunks made up the back and binding. 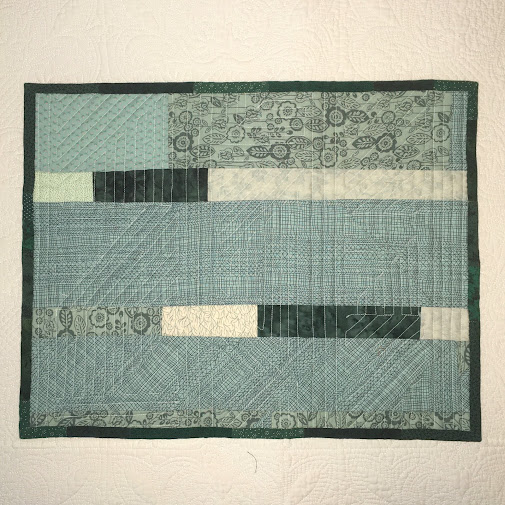 Both placemats are about 18 by 14 inches. The battings are made from pieced leftovers. They'll go to Meals on Wheels when I have a big batch.
I actually enjoyed making the improv placemat with fabric chunks. A lot. And it yielded enough small pieces to complete two (plus a little more) strips, for nearly 16 feet of adding machine tape. 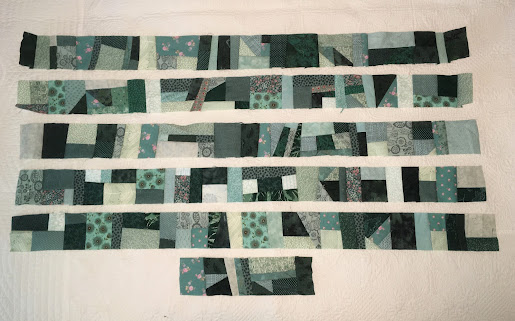 By the time I ran out of scrap variety, I had this much fabric left. 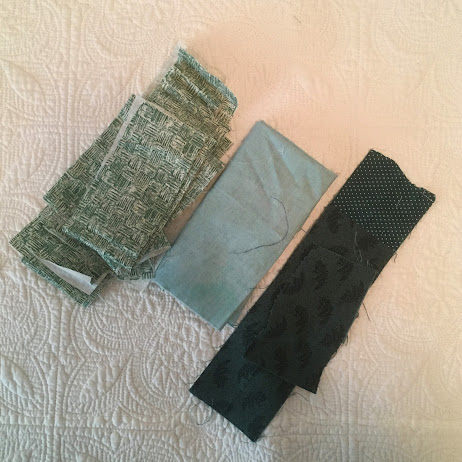 Notice there are still strips of leftovers from my great-nephew's quilt. Oh well, they'll get used eventually. Maybe more binding?
My other RSC project was the Bear Paw using green solids this month. I got carried away and made nine. That's okay, because I know that if yellower greens come up at some point, I won't have many of those. 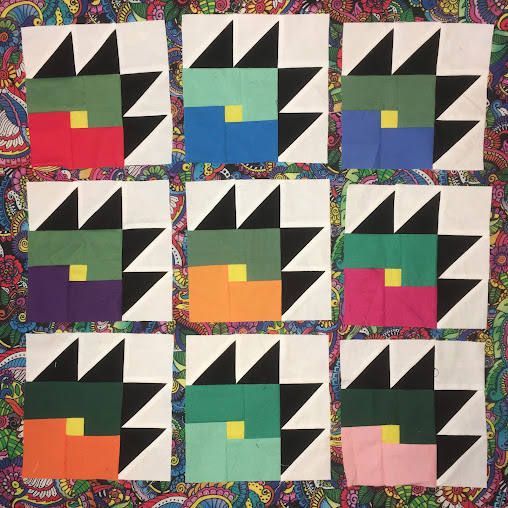 I think I have 30 Bear Paws now.
I was hoping to finish the blocks for my scrappy triangles quilt this month, but low sewing energy as well as time did not allow. Maybe I can pick away at them in the next few days.
I'm linking up on Saturday with Angela at So Scrappy for ScrapHappy Saturday and on Sunday with Cynthia at Quilting is more fun than Housework for Oh Scrap.
So that's it for this month. I have no words of encouragement right now, in quilting or otherwise. I'm sorry. In the past I've worked through raw feelings of grief and anger by making quilts for victims of violence or their loved ones. I know many of you have, too. But that is not enough. My country, which I have loved though it has never been perfect, has lost its way. I only hope and pray that we can somehow come together to find a way to a better path forward. We need to sustain the righteous anger over what we are doing to ourselves and our society long enough to make positive changes. But I fear it is too late.